skip to main | skip to sidebar

Posted by A Hive In Limerick at 10:55 No comments:

Come down and see us... we all float down here.

A few clowns short of a circus?

Judge Tom O'Donnell has been nominated by the Government for appointment to the Circus Court, er Circuit  Court :)  Tom had been on  perch  in the District Court for nigh on 12 years.  Twas only recently that a brazen article, namely John Dundon  created a bit of a fracas down there and referred to Tom as a 'clown'.

We've had Muppets, Parrots and sure why not bring on the Clowns.....


John and his brother Wayne were accused of threatening to kill two female individuals at a house on Hyde Road in April of this year *cough* , one of those individuals being the ex girlfirend of Ger Dundon.  April Collins, called the Gardai to notifiy them of the threats and made a detailed statement.

April dumped Ger Dundon for a convicted rapist, Thomas O'Neill ,  and it seems poor aul Ger couldn't  accept this and move on.  He is 'alleged ' to be heartbroken. O'Neill himself  was recently  charged with threatening to kill a father and son earlier this month.   It is alleged that Wayne and John then issued a chilling death threat to the ex.   Ger himself was given a five year prison sentence earlier this year for trying to extort money from  Mark Heffernan.  The gangster's moll, a classy bird?! *cough* was charged  last year with intimidating a witness in a major investigation into crime in Limerick City.  She followed a woman (who is a relative of Mark Heffernan)  into Penneys, where the alleged incident took place.  For better or worse eh.... April and Ger were due to be married last April.  April admitted intimidating said woman.

Gardai gave evidence on April's behalf that she was an impressionable woman and easily influenced...... *cough*.  Judge Carol Moron then gave April a three year suspended  sentence.
Posted by A Hive In Limerick at 09:47 1 comment:

Waterstone's pick of the best for 2011

Posted by A Hive In Limerick at 20:16 No comments:

The deadliest BULLSHIT is odorless and transparent...

"Apparently people don`t like the truth, but I do like it; I like it because it upsets a lot of people. If you show them enough times that their arguments are bullshit, then maybe just once, one of them will say, `Oh! Wait a minute - I was wrong". I live for that happening.  Rare, I assure you"

Superintent Frank O'Brien is quoted as saying ..."We have a skilful, committed workforce and there has been a year on year reduction in crime..."

A year on year reduction in crime???? Bullshit!

This was in response to a recent  announcement  by the new Garda Commissioner, Martin Callinan, that the budget for tackling organised crime will be cut more than half.  Operation Anvil  will be cut from €21m to €10m.  Superintendent Frank No Brain *cough* doesn't see it as a problem at all at all!  Sure why would he?  they failed to tackle anything in the first instance!   And, Martin Callinan, who not so long ago pledged to clean up Limerick and sort out the escalating crime problems...

It gets my goat when people like this talk shite...

It was only last December that Superintendent David Sheehan announced that there would be more donuts to go round :)
Posted by A Hive In Limerick at 08:30 4 comments:

It is 'alleged' that over the past number of years, that there are in excess of 600 Gardai  now based on Limerick.

Now that the Department of Justice are on a budget *cough*, it is anticipated that the number of Gardai are expected to drop significantly countrywide in 2011.  However, Chief Super David Sheehan maintains that Limerick won't be affected......  (not that anyone would notice anyway!!)

I guess that means there will be more donuts to go round!  The ring of power eh :)
Posted by A Hive In Limerick at 09:11 6 comments:

"We just want to sing a few songs about horses and have a few cans while we're at it.  When you live in the here and now that's all you think about"  - Rubberbandits on the success of their single

Posted by A Hive In Limerick at 13:05 No comments:

well versed in the art of war 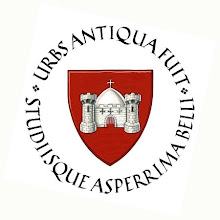